There are fathers ...
waiting until other obligations are less demanding ...
to become acquainted with their sons.

There are mothers who ...
sincerely intend to be more attentive to their daughters.

There are husbands and wives who ...
are going to be more understanding.

But time does not draw people closer.

When in the world are we going to begin ...
to live as if we understood that this is life?  This is our time, our day ...
and it is passing.

What are we waiting for?


Posted by deaconmike at 1:42 PM No comments:

The Catholic Church is engaged in a discussion on marriage and family.  The discussion appears to be rooted in a view of family based on the ideals of past generations rather than the culture as it exists today. The family unit is no longer simply the nuclear family – father, mother and children.  In the contemporary culture, the definition of “family” has changed; and if we are to engage the culture for Christ, we need to deal with this change.  We can’t hide from it. We can long for the days in society when the nuclear family was the norm, but those days are gone.

Today real families come in all sizes, shapes, and configurations. The concept of ‘one-size-fits-all’ family ministry is outdated and insufficient. Our families are old and young, married and single, parents and children.  Some marriages are together, others estranged or divorced. Our families include straight as well as the lesbian, gay, bi-sexual, and transgender members. We do not have the luxury of addressing just the needs of the traditional nuclear family.  Our call as Church is to meet the needs of all the families of the world, and answer the question – What are their joys and hopes? What are their griefs and anguishes? How might we, as the followers of Christ, help them the most? How can we help the human family and individuals move forward – humanely, personally, interpersonally and spiritually?

Some in the Church want us to retreat from the real world and build programs exclusively for “traditional” families.  This strategy is doomed to backfire.  Those we think we are serving, the young traditional nuclear family, often embrace a much broader definition of family.  While the Church may have a problem with gay marriages, for example, they don’t.  Our narrow view of family rather than attract them often confuses and offends them.  They do not share the idea that homosexuality is an “intrinsic disorder.”  Catholics under the age of 40 see homosexuals as God’s beautiful creation, not God’s mistake. “Disordered” is a word that offends them.  So when we design programs only for the traditional nuclear families, in many ways, we are pushing away the Catholic under 40 who desires a more open minded Church view. If we do not dialogue and engage, we risk losing a whole generation.

Marriages and nonmarriages
Pastoral care must be given to individuals in a variety of relationships, even those that may be more complicated or conflicted than the ideal norm: interfaith marriages, pregnancy issues, ethnic or family ostracism or tensions, divorced, remarried, with or without annulments, those living together and yes homosexual relationships. Our first instinct should not be to judge or condemn, but rather to view each individual and couple as our sisters and brothers.

A recently separated or divorced person or newly single parent is in pain, hurting, perhaps feeling guilty, and frequently feeling overwhelmed.  Our first action as Church should be to provide counseling, spiritual support, and pastoral care rather than pulling down the Code of Canon Law from one’s bookshelf. Our first responsibility is to accept people in their pain and aid their healing.

If we must choose between judgment and mercy, erring on the side of graced mercy and pastoral care in doubtful cases would be a great gift to the faithful who yearn for the Eucharist.  Pope John XXIII called the Eucharist, the “medicine of mercy.” Pope Francis points out that the Eucharist, although it is the fullness of sacramental life, is not a prize for the perfect but a powerful medicine and nourishment for the weak. We should find ways to welcome more people to the Eucharist, not to exclude them. Once someone has been fed, they then have the sustenance to accept Christ’s way of life more fully in their lives.

On the issue of divorced Catholics, we need a more compassionate approach. “Till death do us part” may not only refer to the physical death of one or the other spouse, but it could also refer to the death of the marriage relationship itself. Spousal- or child-abuse, untreated addictions, abandonment or similar extreme hardship situations indicate that the bond, the human interpersonal commitment, has snapped, been torn asunder and, in effect, died.

This is a very personal topic for me.  I spent over five years outside the Church because of the Church’s view on marriage.  When my wife Linda’s first husband went berserk and began having extra-marital affairs all over town, what fault was that of Linda?  Her marriage truly died during that period of successive adulterous relationships.  The annulment process took six years to solve a brutally simple case of a dead marriage!  Linda was not only injured by a shameless spouse, she was also injured by her Church’s lack of compassion too.

The Church can and should serve as a balm for people’s wounds, as the tender touch of mercy rather than the instrument of judgment.  As to those who scream for orthodoxy, we are called to be like Jesus when he confronted the self-righteous crowd in the case of an adulterous woman and said: “Let the one who is without sin cast the first stone.” It is telling that Jesus himself, who is without sin, chose not to cast stones either. Before receiving the Eucharist, we all say, “Lord I am not worthy, say but the word and my soul shall be healed.”  Much like Jesus in this encounter with the woman caught in the very act of adultery, our first pastoral utterance should be “neither do I condemn you.”

Homosexuals
In the 21st century, our Church is being called to open our hearts and our church doors to those of the LGBTQ communities. Lesbian women, gay men, bisexual and transgender persons, as well as those still questioning, face many challenges: to figure out and accept their sexual identities, to share their experience with family and loved ones, and to find their place in our society and the Church.  While it seems so easy for many to condemn others for their sexual orientation using traditional theology as their bully pulpit, we should fault on the side of compassion.  Medicine, genetic and gender studies, counseling, and the law are all shouting out to us that the question of the homosexual condition is very complex and in need of further study and theological discernment. We as a Church must endeavor to proclaim that every person has unique dignity in the eyes of God.

Once again forgive the personal note. Over the years, I have employed and befriended hundreds of members of the gay, lesbian, bisexual, and transgender community.  My experience has been nearly universally positive.  These are people of good will and often deep faith.  We must consider the personal needs, sexual experience, and covenant commitment of our LGBTQ sisters and brothers with the utmost pastoral care and sensitivity.

In this the Year of Mercy, God is calling all Catholics to explore prayerfully what it means to love your neighbor as yourself.

“I dream of a 'missionary option,' that is, a missionary impulse capable of transforming everything, so that the Church’s customs, ways of doing things, times and schedules, language and structures can be suitably channeled for the evangelization of today’s world rather than for her self-preservation.”  Pope Francis -Evangelii Gaudium

What does this mean?  How exactly does a parish engage this  "missionary impulse?"

I'd love to hear your thoughts and ideas!  Email me or leave a comment.

Posted by deaconmike at 8:07 AM No comments: 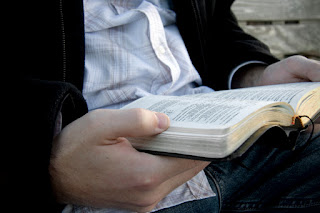 1. Place yourself in the presence of God.
Remember that God is near you. Take a moment to invite him into your time of prayer. Meet him as if your are meeting a good friend.

2. Ask God for his assistance.
Ask that he would help in your mediation. Pray that God uses this time to draw you closer to him.

3. Read over a passage of Scripture or some other spiritual work.
This spiritual reading can be the words of the Pope, Scripture, or your favorite Christian author.

4. Take some time to reflect and think about what you have read.
Your goal is not to necessarily learn something, but to enter more into a relationship with Jesus, to understand yourself and God more intimately.  Listen to what God is trying to tell you.

5. Have a conversation with God about your reflections and thoughts.
In this stage, you want to ask yourself:  What stood out to you in your spiritual reading? What is God trying to tell you through what you just read? What feelings arise in your heart?  Talk to God about these things.

6. Conclude your time in prayer.
In your conclusion, thank God for your time in prayer, petition him for your needs and the needs of others.  Take the insights you have gained and put them into action.  For example, you may have felt the call to forgive someone.  Go and do it.  Maybe you heard the call to be more faithful to prayer.