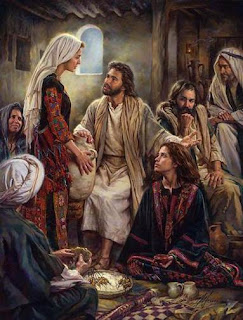 Any of us who have been coming to Mass for a few years know the Martha and Mary story. When we hear their names, many of us think, oh yeah, Martha is the grouchy sister that needs an attitude adjustment, and Mary is the good sister. Martha is so often seen as "the lesser" example for us when compared to her sister Mary.  But maybe that's not fair. In case you haven’t figured it out yet, I’m kind of a Martha fan.

Martha clearly seems to be the leader of the family. Luke tells us that she is the one who welcomed Jesus to the village. She took charge of the hospitality, just like Abraham did when the LORD came to his town. That said, you must admire Mary too.  She seemed to figure out that having Jesus in the house was something amazing, and sitting at his feet and listening was an incredible opportunity. She saw it as a better way to spend her time.  And can you blame her? If Jesus showed up at your house, would you rather sit listening to him or fix dinner?

For me, both sisters are admirable.  You have the servant leader of the family Martha doing what needs to be done.  And the scholarly one Mary who recognizes the rare opportunity to learn from and pray with Jesus. Both are serving Jesus but choosing different ways to serve. I think Luke set up this story when he wrote his Gospel. Look at where Luke positions this story. I don’t think it’s an accident.

Right before this story comes the parable of the Good Samaritan, which is the ultimate story of discipleship as service. And right after the Martha and Mary story, Luke tells how the disciples come to Jesus and say: “Lord, teach us to pray. Which is where we learn the Our Father the most important prayer Christians have. So, you see, the sister of service and the sister of prayer and contemplation are sandwiched right in between the two passages which emphasize the importance of both. There isn't just one way to follow Jesus. In my mind, both sisters demonstrate equally valid and essential examples of leadership. One shows us the importance of study and prayer. The other sister is a person of action who takes charge and cares for the needs of others. She shows us faith in action. Both Mary and Martha teach all men and women to have faith in Jesus as they seek their mission, their form of service.

But there is something more to this story than their examples.  It’s important not to miss how radical Jesus was. Jesus consistently challenged the prevailing culture exposing its flaws. What Jesus was doing was a radical change in that culture. He was elevating women in the discipleship community.

The mistake Martha made that day was to get so caught up in her servants’ heart, so full of worry about her hostess duties that she completely misses the more important point.  Jesus says to her, "there is need of only one thing."   Not many things. The greater need is to accept my invitation to be fully accepted as a disciple.

Luke tells us that day, Mary "sat beside the Lord at his feet, listening to him speak."  In that time, this is the normal position of the male disciple. To sit at the feet of a rabbi meant that a person was one of his disciples. Martha was so busy that day she missed the plan Jesus had for her. He was challenging the cultures traditional belief of a woman’s place. Jesus’ praise for Mary was that she “got it.” And she dared to act in a way that was against the expectations for women at that time.

In the story of The Good Samaritan Jesus makes the hero someone that no one in that society would ever have seen as a hero - a Samaritan.  In the story of Martha and Mary Jesus again does something just as shocking.  He invites Mary to the same level as - a male disciple. Once again, Jesus does something no one in that society would expect. To call women to be equal to the men in discipleship was radical. So radical Marta missed it. That was her mistake. She missed the opportunity Jesus was calling her to because she was too busy with busy work.

We do that, don't we?  We get so caught up in the day-to-day work, the chores and things of life, that we forget to spend quality time with Jesus.  And because of that, we can miss how he is calling us. Our call as his followers, his disciples, is a call to be like Him, to shake up a world that needs change. Jesus is saying to us like he did Martha that day, "you are anxious and worried about many things," but you really only need one thing. And that’s to follow me, to be my disciple in the world.” What’s causing you anxiety and holding you back from seeing what Jesus is calling you to do?

We need to learn from Mary and spend more time with Jesus sitting at his feet carving out time each day to listen and pray.  Can you hear him saying today …?
I’m calling you to be my disciple regardless of who you are!

How are you going to respond?… …  Radically, I hope!

Posted by deaconmike at 3:14 PM No comments: