Can you hear how radically changed that whole community of Sychar was through this encounter between Jesus and a rather imperfect woman? Most Jewish men would have looked down on this lowly Samaritan woman, but Jesus treated this woman with dignity, and it changed a whole community.

This story reminded me of an event that is seared in the minds of many in my generation;an event that not only changed a whole community but our whole country. In 1957 the federal government ordered Central High School in Little Rock, Arkansas to become racially integrated.  The image of armed shoulders escorting nine very dignified, stoic black girls and boys into school is something none of us who saw it will forget. 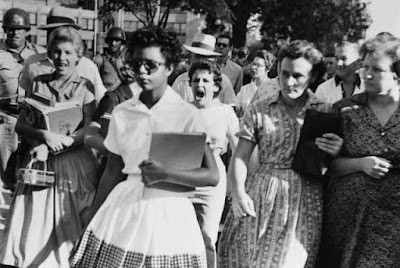 Melba Patillo was one of the nine Black students escorted to class by U.S. marshals. Whites lined the sidewalk and jeered as she went into school. In the course of that year Melba was spit upon, tripped and called names. What pained her most, however, was being ignored by the other students. She wrote a book about her experiences entitled: Warriors Don’t Cry.  In it she writes: “All I wanted them to say was, ‘Hello, how are you? What a nice blouse.’ ” Melba recalls lying in bed at night filled with fear. But she rarely cried because her grandma kept telling her, “God’s warriors don’t cry.” One day she wrote in a diary:  I am growing up too fast.  I’m not ready to go back to Central and be a warrior. I just want to stay right here listening to the songs of Nat King Cole. The story of Melba Patillo highlights the whole problem of prejudice. And she represents the kind of change one person can make in a community. 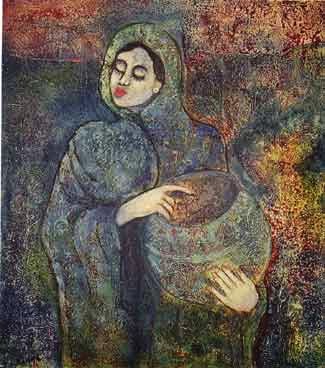 Unfortunately prejudice is as old as the world.  And it was part of the world in which Jesus lived as well. Jews harbored a deep prejudice against the Samaritans. Jesus spoke out against it forcefully, in a variety of ways. He shocked his Jewish listeners by making a Samaritan the hero of one of his best-known parables: the parable of the Good Samaritan.  Many Jews were no doubt irritated when Jesus pointed out that ten lepers were healed one day, but the only one to return to give thanks was a Samaritan. And many Jews were no doubt shocked to learn that Jesus asked a Samaritan woman for a drink from a common cup Samaritans used. It was like a white man in the south in pre-civil-rights days asking a black woman for a drink from a common cup that blacks used.  Even the Samaritan woman was shocked, saying to Jesus:  “How can you, a Jew, ask me, a Samaritan woman, for a drink?” But Jesus did something even more dramatic to make a statement about the prejudice against the Samaritans of his time. He revealed to this lowly woman who he was, Jesus tells the woman that she has been married to five men and she was living with a man who wasn't her husband. He knows us through and through.  Shocked that he knew this, she responds: “Sir, I can see that you are a prophet.” “I know that the Messiah is coming, the one called the Christ; when he comes, he will tell us everything.” Jesus said to her, “I am he.”

The woman left her water jar, went into the town, and exclaimed to the people there “Come meet Jesus!”  And they came, and they believed.  And – what did she tell them?  The most simple thing imaginable. He knew me.  He knew my whole messed up history, and he didn't judge me. He loved me, and offered me new life. That’s the “living water.”  It’s the unconditional love of Christ.  A love we all experience through our baptism.  New life, and a call to mission!

The Samaritan woman was the least likely person imaginable to become a missionary, to become an evangelist.  A woman, a Samaritan woman at that!  One who started out as an outcast – like Melba Patello – she became Jesus’ very first missionary to the non-Jewish world … amazing!

That Samaritan woman is all of us.

That’s the message in today’s Gospel for each one of us.  We can change our world, our community.  We are qualified.  We are good enough.  We are all sinners like that woman.  And we too can respond to our encounter with the mercy of Christ -his unconditional love of us- the way the Samaritan woman did.  We can share with others the Good News.  That our God knows us, and loves us – as we are – and offers us new life!  The living water of Divine life. Being an evangelist isn't hard.  It’s just telling others what we've found; sharing our story.

There are 67 million Catholics in the United States.  Only 24% come to Mass once a week regularly.  That means there are 50 million Catholics that are inactive in their faith.  Statistics show that the best missionaries to inactive Catholics are … friends … neighbors … or family members. Statistics also show that nearly two-thirds of all Catholics who became active again do so because a friend or relative invited them to return.

That is our challenge.  There lies an area of missionary work that every Catholic in the church can … and should … become involved.  We all know inactive Catholics!  If you truly want to make this Lent something special, make a loving invitation to someone you know to come to Mass with you one week.  You never know, your simple invitation might be the cause for them finding their way back to the Church.

If Jesus can change a whole community through the witness of one humble woman,  and nine courageous black kids with a sense of mission can change an entire country, we can change our world too – our community – our family.

If you think you don’t have what it takes to be an evangelist, just read this Gospel again,  no one was less likely in the time of Christ for this call then a Samaritan woman who had been married five times and was living with a sixth man.

You are worthy! You are capable! And, you are called!

Posted by deaconmike at 4:09 PM No comments:

Something to contemplate today from Anne Lamott:

“The opposite of faith is not doubt.

The opposite of faith is certainty.”


Posted by deaconmike at 9:07 AM No comments: