Saint Paul said to the Corinthians:

"All of this is a gift from God,
who brought us back to himself through Christ.
And God has given us this task of reconciling people to him.
For God was in Christ, reconciling the world to himself,
no longer counting people's sins against them.
And he gave us this wonderful message of reconciliation."

St. Paul is saying something we all need to embrace. He expresses what we as Christians believe about God. Paul is saying that Christ died for our sins - your sins and my sins – our debt is paid in full; our sins are no longer counted against us.

Do we believe it?

In the parable of the prodigal son Jesus confirms what Paul is saying. I want to give this story a bit of a modern twist and see how we react.

Suppose for a minute you had a friend who had a nice estate held mostly in safe investments like tax-free municipal bonds, and that he had two children a son and a daughter. On the request of his daughter, your friend converts half of his assets to cash and gives it to her and adjusts his will accordingly leaving the rest of his assets upon his death to his son.  She takes off for San Francisco gets a fantastic apartment in the city. She lives big, lots of nights on the town. Her cool new Silicon Valley friends convince her to invest her inheritance in a series of risky new tech stocks.  A slide in the stock market leaves her broke, and the cool new friends are nowhere to be found.  Then you hear that just the other day she comes back home to her Dad penniless. Your friend is overjoyed at her return, and he is touched by her sorrow at having blown her inheritance. He comes to you for advice.  He thinks he should revise his will to divide his remaining assets between his two children.

What would you advise?

How do you think the brother would react who loyally worked with his Dad to maintain and grow the family estate? Most of us would tell our friend to embrace the loyal son and say to the daughter: “Sorry you got yours and blew it. Right? 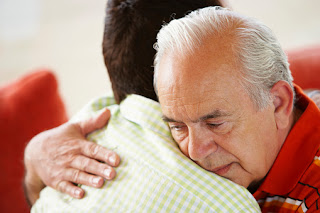 But Jesus tells us that's not how our God thinks.

The idea that God’s love comes to us with no strings attached seems to go against every instinct we have. It’s just too good to believe. Can God’s love really be unconditional?  Many of us have a vision of a God that demands we never mess up, we believe we must earn God’s love. The God that Jesus describes in the parable about the prodigal father – the loving Father – who demands nothing and is unbelievably generous in his forgiveness, love, and mercy just seems too good to be true.

Isn’t it just and fair to give more to the good people and punish the people who mess up? Shouldn’t there be some merit to our salvation?

The shocking truth Jesus introduces us to in this parable is that grace does not depend on what we have done for God … but … what God has done for us. The great theologian Karl Barth once said the definition of God comes down to this one idea – God is the one who loves.

How do we experience this grace in our lives and how do we show this grace to others?

There are three characters in the parable of the prodigal son two sons and a father. My guess is most of us identify with one of the two sons when we hear this parable. But the truth is the call of this story is to identify with the Father. Our goal as Christians is to be like the Father loving, forgiving, and generous.

In his book “Capital of the World” Ernest Hemingway wrote about a father in Spain who had a son named Paco. Because of his son's rebellion, Paco and his father were estranged. The father was bitter and angry with his son and kicked him out of the home. After years of bitterness, the father's anger ended and he realized his mistake. He began to look for Paco, with no results. Finally, in desperation, the father placed an ad in the Madrid newspaper. The ad read: “PACO, ALL IS FORGIVEN, MEET ME AT THE NEWSPAPER OFFICE AT 9 A.M. TOMORROW. LOVE, YOUR FATHER.”


Paco is a rather common name in Spain, and Hemingway wrote when the father arrived the next morning, there were 600 young men all named Paco waiting and hoping to receive the forgiveness of their fathers.

There are so many longing for the love of the Father; our call as ambassadors for Christ is to show those in our lives that kind of forgiving, generous love. Our call is to be like the Father.  Ready to forgive. Eager to restore a relationship because God has entrusted to us the message of reconciliation.

Are we ready to show this forgiveness to those in our life? No matter the injury?