Thanksgiving is behind us and now we prepare for another great holiday – Christmas.  Decorations go up; presents are bought. It’s a very busy time.  Today is the first Sunday of Advent.  Advent is a time the Church sets aside also, to prepare for Christmas. The purpose of Advent is to remind us who we are Catholics to add the dimension of faith, to add a spiritual dimension to our Christmas preparations.  Advent asks us, as we prepare for the holiday, to remember to keep Christ in Christmas.

Today is a day to ask ourselves: How am I going to do that for the next four weeks? How am I in the busyness of this season going to stay focused on what this season really means – the coming of Jesus Christ, our Savior, into the world?  We get so busy with life it’s easy to neglect our spiritual lives.

In the second reading, Paul says don’t get so caught up in the routine of life you stop thinking about the big picture.  He says: “You know the time; it is the hour now for you to awake from sleep. For our salvation is nearer now than when we first believed.”

Jesus says the same thing in the Gospel today – WAKE UP! This life is fleeting.  He says: “Stay awake! For you do not know on which day your Lord will come.” This warning is not to create fear, just the opposite. It’s a call to trust in the message of Christmas. Jesus comes to save. The spirit of Christmas is all about having hope, hope that God has a plan for our future. Hope in the primary message of Christmas that God sent Jesus to save us. 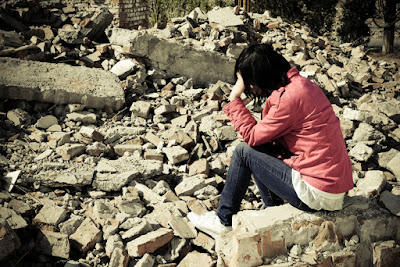 I saw a story recently that illustrates this message.  A few years back a devastating earthquake killed 30,000 people in Armenia.  Minutes after the tragedy, a father ran to his son’s school building and found it completely collapsed. Remembering that his son’s classroom was in the rear corner of the building, he ran over to it and began digging, pulling away the rubble with his hands.

That’s the Advent spirit; Armand has it. It’s all of us who believe in Christ letting everyone around know it’s going to be alright. Jesus is coming to save us.

There are so many parallels in this story with our world right now.  The world is full of people like the ones in this story. There are people like the grief-stricken parents standing around the collapsed school after the earthquake. They see our world in a state of moral and spiritual collapse. They see nothing but a mountain of crime, war, drugs, immorality, corruption and disrespect for all forms of life.  So many people have given up and only stand around, lamenting the situation.

Like Isaiah says in the first reading, “Let us walk in the light of the Lord!”; or, as Paul says in the second reading, “Put on the Lord Jesus Christ. Put on the armor of light.” Hopefully, this story is an invitation to us to do this, to become like Armand and his father, to be voices of hope in our world. It starts by keeping hope alive in our hearts by being like my nurse friend who found an easy way to keep Christ in her heart; to put on Christ as she does her job.  Like my friend who takes a moment to pray before work at the workplace Christmas tree, so he keeps the light of the Lord – the spirit of Christmas – in his heart all day long.  Advent is all about keeping hope alive and sharing our Christmas hope with others.  It’s about trusting that no matter how dark and hopeless things seem, we know Jesus comes to rescue us.

This year be a beacon of hope to others in your life.
That’s the best way to keep Christ in Christmas.

Posted by deaconmike at 3:13 PM No comments: