This story in Luke’s gospel comes near the end of Jesus’ life, the end of his work here on earth.  Jesus uses this moment to make sure his disciples understand what was coming, and what it means to be his follower, to be his disciple. He is not just talking to them; he is talking to us too.

They have just been admiring the great Temple in Jerusalem. He tells them – As great as this building - this Temple - is all that you see here, he says, will be destroyed.  There will come a day when there will not be left a stone upon another stone, it will all be torn down. 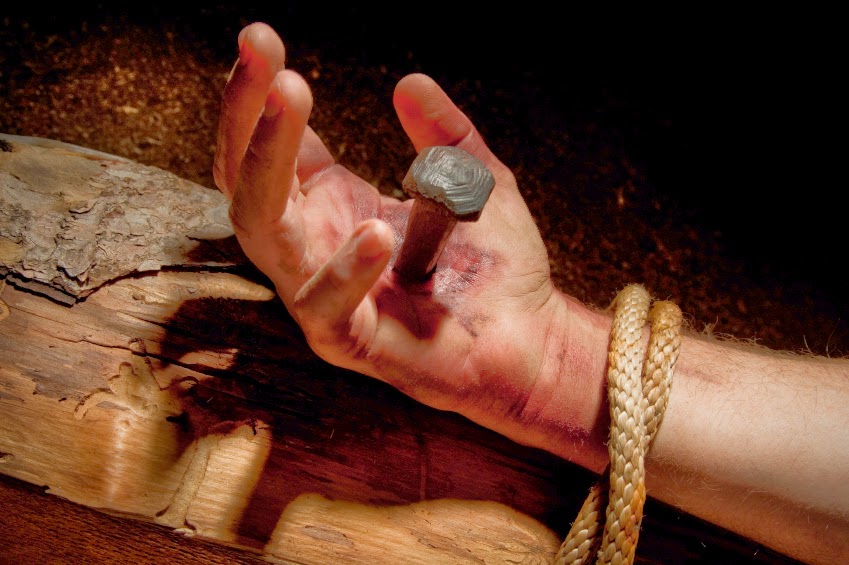 In a few days Jesus would be hanging on a cross, and their world would be turned upside down.  Jesus wanted to prepare them.  Everything they knew was about to change and it wasn't going to be easy for them. He said – a time is coming when you will be handed over for persecution, even by parents – brothers – relatives – and friends.  You need to be ready for the end.

When St. Luke wrote this story, sometime after the year 70 AD, the Romans had destroyed the Temple as prophesied by Jesus.  It was a time when St. Luke’s community was suffering the persecutions that Jesus predicted. So in today’s Gospel Luke was trying to encourage them by telling them this story.  He was saying – don't give up because God is always with us. God has a plan that leads to LIFE.

The signs Jesus gave that day for the end of time seem to always be with us. Wars and natural disasters seem to come and go in every generation.  Just think of the last few years.  We have had an earthquake in Haiti, a super storm Sandy in the east, the Tsunami in Japan, brush fires in Australia; and a Typhoon in the Philippines. In my lifetime there seems to have been a war, somewhere in the world, every year. The world seems to be at war nearly all the time. We have become so conditioned by the death and destruction of man-made and natural events that we ignore them as signs of the end of time, of the fragility of life.
The early Church lived each day as if Jesus might return … that day!

After the death of Jesus the apostles all lived as if the of the end of the world were coming immediately.  They lived as if each day might be their last because of Christ’s return, or being persecuted for their faith.
Today here in San Diego, on a beautiful weekend, when we hear Jesus say in the scriptures that following him may cause people to persecute us that idea seems - well -crazy. This message doesn't seem for us, and so it has little or no impact on how we live our lives day-to-day. Even though in the United States we feel quite safe from persecution, perhaps the point that Jesus was making that day – for us – is that the standard by which we should be living, the measurement of our faith life should be weather we would be willing, if required, to face martyrdom.

We are all being asked this morning:
Would you give your life for your faith?

We take our freedom for granted. Over the past few years thousands of Christians have lost their lives. Right now, as we sit here in this beautiful church, in many countries gathering for Mass is illegal. To people in those countries Mass is so important that they’ll risk their lives to go.

Is Sunday Mass that important to us?
That is what Jesus is asking each of us … today.  How are you living your faith? Are you persevering – living a purposeful, unwavering, vibrant faith? Because today might be the day you meet Jesus – face to face.

Our faith in Jesus our following him, our choosing to be his disciple, his follower is not meant to be a casual commitment; it is meant to be everything. It is meant to define us, and drive us, and be the foundation of the way we live our lives. And … it is also meant to bring meaning and joy to our lives too.

Rachel Remen is a doctor who has been counseling people with chronic and terminal illness for more than twenty years. She is co-founder and medical director of the Commonweal Cancer Help Program. She tells a story about a women in her thirties who was told that Remen worked with the dying, and confronted her, telling her she resented all this talk about death as something meaningful.

Then she recounted the story of her young husband’s death a number of years earlier.  He had been diagnosed with cancer and as therapy after therapy had failed he became bitter, lashing out at everyone, rebuffing anyone who tried to comfort him.  When he looked back at his young life he regretted the choices he had made. He died angry and withdrawn.  She ended her telling of this ordeal saying – “I do not want to die this way.”
Remen asked her – “So how do you need to live?” The woman looked puzzled. So Remen asked her again.  “How do you need to live to be sure that you do not die this way?” This time she got it. She looked past Remen for a moment, making eye contact with something intensely personal. Then she reached out and touched Remen’s hand and turned away into the crowd.

Some months later, Remen receives a note from this woman.  She realized she was not living as authentically as she wanted.  There were many things left undone; many roads not taken.  She began to revise her life in the light of her death. In her case, life was still tested in the dying but in a reverse fashion. Contemplating her death started a process that lead to her rearranging her life.

That’s what Jesus is saying today …
He is saying – time is short – persevere, stay focused on what is truly important and really live - your life.

We should not be afraid that our life will end
rather we should be afraid that it will never begin.
Worry about tomorrow only steals the joy from today.

God’s greatest gift to us is life.


How we live it is our greatest gift to him.
Posted by deaconmike at 4:50 PM

Amen Deacon Mike!!!!! Life is so easily taken for granted and we can forget that all the glory and happiness come from Christ. However, it is you who taught me to be grateful for the bad things too, which always lead right back to glory. :)