Finding out Santa isn't real can be tough. 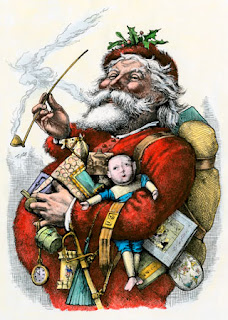 Santa Claus is a wonderful myth we all grew up loving.  The Dutch who founded New York City brought with them their love of Holand’s patron Saint - St. Nicholas. The Dutch were the first to depict him with a full white beard, who wore a magic cloak and dispensed gifts to children. Children placed their shoes and hay (to feed the horse) near the fireplace. Santa Claus would replace the hay with nuts and candy in the children’s shoes. Santa, as we know him, is very much a product of American creativity.

The image and stories we grew up loving have only been around since the 19th century. Any number of people are responsible for “inventing” the Santa Claus we know today. Clement C. Moore wrote the poem – A Visit from St. Nicholas in 1822. Political cartoonist Thomas Nast drew the first depiction of Santa Claus as we envision him in Harper’s Weekly in 1866 (shown on the left). You could even credit the marketers of Coca-Cola who popularized the image we hold so dear. But it seems most of the credit for the Santa myth we grew up with goes to author Washington Irving who wrote such classics as "Rip Van Winkle" and "The Legend of Sleepy Hollow." Washington Irving published "Knickerbocker's History of New York" in 1823. In this parody of colonial America, Irving took much glee in satirizing the early Dutch settlers of New York and their traditions, including their patron saint, Nicholas, whom they referred to as Sancte Claus. But in doing so, he also created our wonderful Christmas tradition.

Another Christmas event many of us have experienced is the sadness of a child when they discover that Santa is just a story – a myth. Many of us remember the discomfort when our children found out it was all a bit of a lie. The reason for this post is to suggest what to do when this occurs.  Rather than tiptoe through that awkward moment, I suggest we immediately tell each child the story of the real Saint Nick. 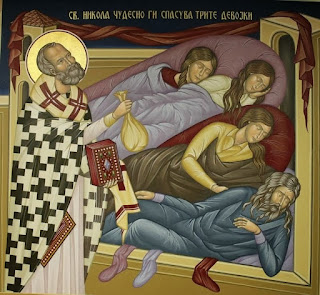 The real story of Santa Claus begins with Nicholas, who was born during the third century in a village on the southern coast of Turkey. His wealthy parents, who raised him to be a devout Christian, died in an epidemic while Nicholas was still young. Nicholas was such a good boy that he desired to obey Jesus' words to "sell what you own and give the money to the poor," Nicholas used his whole inheritance to assist the needy, the sick, and the suffering. He dedicated his life to serving God and was made Bishop of Myra while still a young man. Bishop Nicholas became known throughout the land for his generosity to those in need, his love for children, and his concern for sailors and ships.

The gift giving associated with St. Nick stemmed mostly from a story when he was very young.  In his town, there was a poor man with three daughters. In those days a young woman's father had to offer prospective husbands something of value—a dowry. The larger the dowry, the better the chance that a young woman would find a good husband. Without a dowry, a woman was unlikely to marry. This poor man's daughters, without dowries, were therefore destined to be sold into slavery. Mysteriously, on three different occasions, a bag of gold appeared in their home-providing the needed dowries. The bags of gold, tossed through an open window by Nicholas, are said to have landed in stockings or shoes left before the fire to dry. This led to the custom of children hanging stockings or putting out shoes, eagerly awaiting gifts from Saint Nicholas. Sometimes the story is told with gold balls instead of bags of gold. That is why three gold balls, sometimes represented as oranges, are one of the symbols for St. Nicholas. So our wonderful tradition of gift giving at Christmas comes from remembering the kindness of St. Nicholas the generous gift-giver.

Posted by deaconmike at 8:34 AM